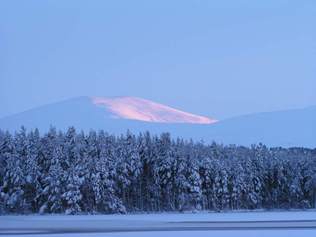 As winter takes hold on the Highland landscape, the scenery can be as stunning as anywhere in the northern hemisphere. Although the days shorten, the birds are far more active making the most of the daylight to hunt prey and forage in the forests. Eagles will be on the wing from dusk until dawn, often followed by a noisy entourage of honking Ravens as they hunt the slopes for Mountain Hare, Grouse or even a Deer.
In the forest Crested Tits join the many feeding flocks which move endlessly through the foliage, often easy to see at the many feeding stations in the area. Crossbills too should have little trouble finding food providing there has been a good cone crop, these early nesters can often be heard singing from the top of a pine as early as January on a calm day.
The pinewoods take on a magical appearance as the golden rays of the low winter sun slice through the frosted branches on a winter afternoon, the echoing calls of Ravens and Crows overhead as they head to winter roosts.
The rivers are host to singing Dipper at this time of year as well as Goosander, Whooper Swans, Goldeneye, Wigeon and Teal feeding in the shallows, you may even spot an Otter as it slips from a snowy bank. 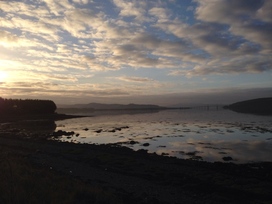 One of the most beautiful and unspoilt coastlines in Britain, the Moray Firth, with it's sweeping beaches, tidal mud flats, many harbours and bays a birders delight . In early spring, Sea-duck should still be in good numbers. Long-tailed Duck, Velvet Scoter, Common Scoter all raft in the bays, joined by those divers and Slavonian Grebes still yet to settle on breeding grounds further north. A great place for rarity hunting as migration gets underway it has an impressive list of vagrant finds.....some such as the King Eider a fairly regular occurrence. Iceland and Glaucous Gull are regular and there are numerous sites to spend time looking at waders. I have been birding along this coast for many years, and each carefully selected spot reveals a slightly different range of birds....carefully planned to get the most from your day. There are ample facilities along the coast to take a break if you wish with some excellent local seafood pubs well worth a try.